Named after Kari Hunt Dunn, whose 9-year-old daughter was unable to call 911 because she did not know a “9” was required to access an outside line from their motel room. The Personal Story Behind Kari’s Law.

Kari’s Law applies to multi-line telephone systems (MLTS), which are telephone systems that serve consumers in environments such as office buildings, campuses, and hotels. Kari’s Law requires MLTS systems in the United States to enable users to dial 911 directly, without having to dial a prefix to reach an outside line, and to provide for notification (e.g., to a front desk or security office) when a 911 call is made. FCC FACT SHEET.

Who Does Kari’s Law Affect?

Kari’s Law applies to any “person engaged in the business of installing, managing, or operating” MLTS. Such persons “may not install, manage, or operate for use in the United States such a system, unless such system is configured such that a user may directly initiate a call to 9-1-1 from any station equipped with dialing facilities, without dialing any additional digit, code, prefix, or post-fix, including any trunk-access code such as the digit ‘9’, regardless of whether the user is required to dial such a digit, code, prefix, or post-fix for other calls.”

Bottom line:
If you install, own or operate a multi-line telephone system in the United States, then Kari’s Law affects you.

Kari’s Law will require that any MLTS will allow callers to reach emergency services via 911 without the need to dial a prefix for an outside number first. All organizations using a multi-line phone system will need to update their phone configurations accordingly.

When Does Kari’s Law Take Effect?

We spent a lot of time considering Kari’s Law and the Ray Baum act when designing our ClearlyIP SIP Trunking platform and IP phone line. We contacted many competitive SIP Trunking providers, and surprisingly many don’t have options to support providing a dispatchable location outside of requiring end-users to purchase additional standard e911 locations plus DIDs associated with each e911 location, growing expensive quickly! Surprisingly some carriers we contacted had never even heard of Kari’s Law or the Ray Baum Act, which was the most startling part of our research.

In addition to the service providers’ ability to support these laws, your PBX manufacturer (both phones and PBX platforms) must also ensure they provide resources needed to support these mandates. Some larger proprietary systems have had the required technology either directly embedded or via third-party add-ons for some time. However, we realized there was not a similar standard solution in the open-source Asterisk®️ / FreePBX®️ space where our team has a wealth of experience. With the prevalence of businesses depending on these platforms, we decided to roll out Trunking Services and Re-Brandable IP Phones with built-in support for the technologies needed to be compliant with Kari’s Law and the Ray Baum Act. 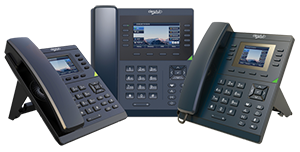